Research into adolescent development has described the process that the young teenager uses to develop a mature sense of love. When the teenager enters into early adolescence they begin to have romantic and love feelings for another person for the first time in their life. This has been described as learning how to develop a new skill, like learning how to ride a bike. The young teenager needs to learn how to love another person and needs practice to develop that skill. 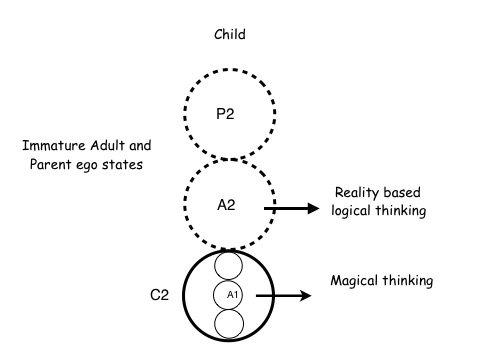 Over time the Adult ego state develops, becomes more mature and then the person can engage in more logical, reality based thinking styles. However the A2 thinking does not replace the A1 thinking. Instead it gives the person the ability to engage in two different styles of thinking, magical or logical. The fully grown adult is quite capable of still engaging in A1 magical thinking and in fact most people often still do. 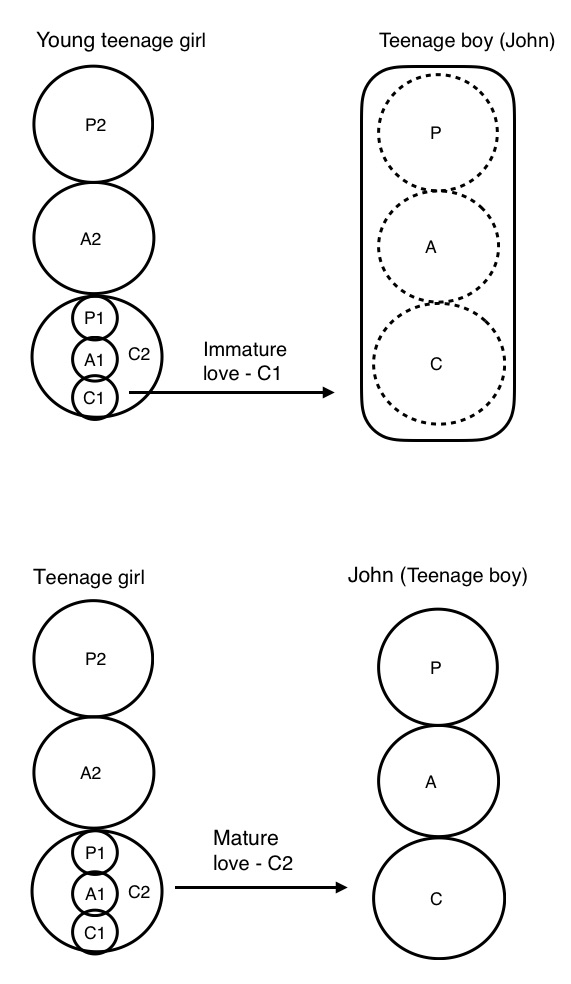 Initially the girl does not understand the boy as an individual when she develops love or romantic feelings for him. Instead she sees him just as a boy and hence the ego states (his personality) are ill defined in her mind in relation to these feelings.

As she develops a more mature sense of love and romance she stops seeing him as simply a boy and sees him more as the individual person that he is. Hence his ego states are presented as clearly defined

This could explain why young teenage love and relationships can be so transitory and superficial. The love and attachment is not to the individual person and hence it is easier end the relationship, with less longer term angst. 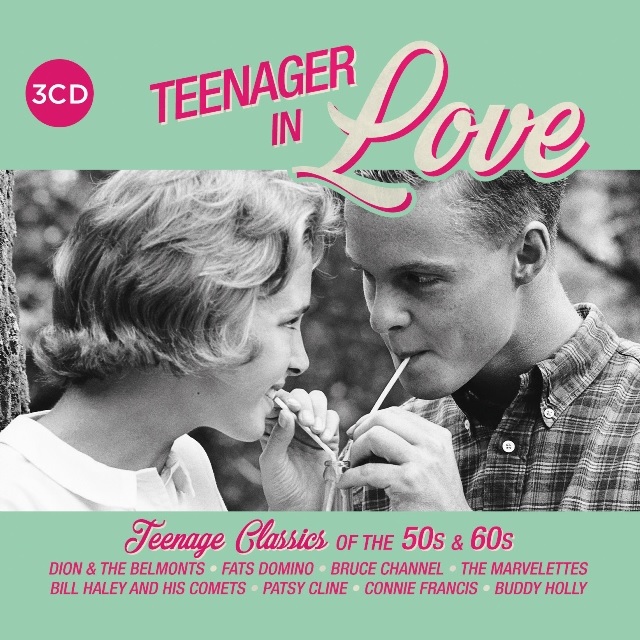 However as with thinking, the C2  more mature love does not replace the ability to still have C1 immature love. Instead the fully grown adult has a choice of the two types of love and can still experience immature love under certain conditions. Some possible manifestations of this are

1. The narcissistic personality type. This person has the life position of I+U?. The other person tends to be seen as simply an object and thus the narcissist would tend to experience the more immature forms of love as shown here.

2. Objectophilia. Objectophilia or object sexuality refers to individuals, who tend to develop strong romantic attachments or bonds with inanimate objects or structures. The model of immature love being described here could explain the psychological dynamics behind this paraphillia.

3. Hero worship (Pop stars) – As we know teenagers in particular can have strong attraction feelings for pop stars. They can develop strong feelings for people they have never met and therefore don’t personally know. They can’t fall in love with the pop star as an individual because they don’t know them individually but they can have immature love for them.