The final part of this composition on strengthening the Adult ego state seeks a different path.

Modelling. All children model on their parents. If the parents display defective Adult then children will model that to varying degrees. If the child has a particularly strong attachment to a parent who has poor Adult then the modelling can be quite strong and the child will pick up the same traits. This on its own is usually not that hard to treat as it involves simply adding to their Parent ego state tapes. The establishment of that tape may take some time but it is a natural and instinctive process to introject others into our Parent ego state. 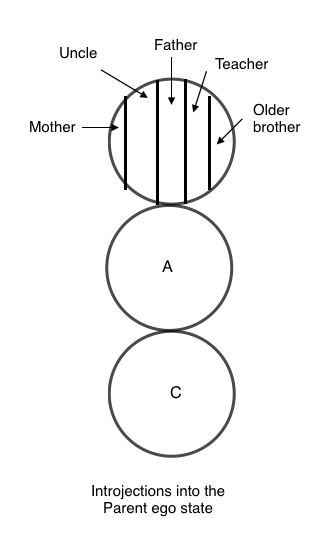 As this diagram shows the Parent ego state is merely a collection of tapes that have been modelled from various parent type figures. In adulthood it is continually being added to and one can seek out those who seem to have strong Adult function and model off them. Thus creating a new tape that has modelling for a well functioning Adult ego state.

Exercises can be done where the counsellor assists the person to identify their main Parent ego state tapes and draws them as in the diagram above. This allows the person to be aware and then start to make choices about which ones to listen to and which ones to turn the volume down. Which one to practice and so forth. The more they are practised the more robust that tape will become.

Injunctions. Sometimes parents for their own unconscious reasons will send a “Don’t think” message to a child. This type of message to the child can be particularly powerful if combined with consistent modelling.

Historically this has occurred in the sex role scripting of children. Boys were told they were practical problem solvers who would think problems through. Girls were told. “Not to worry their little heads about such things” and they didn’t really need an education because they were going to become just mothers and home makers. They did not need strong logical problem solving skills when the men could do it for them. Hence the woman ended up not being able to change the tire on a car or drill a hole into the wall to hang a picture.

Thus we ended up with a way of influencing the dynamics of the relationship between men and women particularly in relation to the power structure. This is why in the women’s liberation movement of the 1960s, women becoming more educated became a central aspect of that societal change. Those with strong Adult functioning are going to be the ones who are in charge in relationships and politically powerful.

If mother or father have such power issues of their own then they can script a child to be a certain way in relation to their Adult ego state strength. If mother thinks that women should be dependent on men then she may deliver such a “Don’t think” message to her daughter and the girl’s Adult ego state functioning will suffer.

In other cases a father may be insecure in himself and thus becomes competitive with his son. The father’s own Child ego state may be scared that his son will become more successful than he is and thus he can also unconsciously tell the son, “Don’t think” in a whole variety of ways.

How highly did the parents value education? Was it important for their children to get a good education and go as far as they can or was education derided or simply ignored.

Second, when the child showed mother and father their report card how did the parents respond? If the child got a high mark what was the attitude and comments – were there positive strokes, negative strokes or no strokes at all? Similarly what was the stroking pattern the child received when he got a low mark on his report card. As a rule of thumb parents should direct 70% to 80% of their attention (positive stokes) to the child’s successes on a report card. 20% to 30% of parental attention needs to address the academic difficulties a child is having such as why and what can be done. This should include no positive stokes but only Adult problem solving between the child and parent. 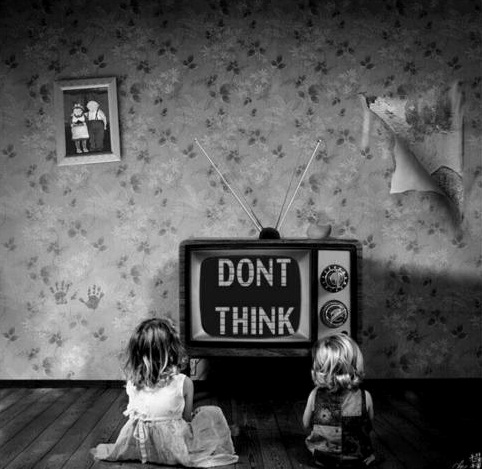 Finally some parents in their parenting style will put down the child or vent their anger at the child by denigrating it. This can occur in many areas such as the child’s physical appearance, its sporting prowess, its social skills, musical ability and so forth. It can also be at its academic ability or thinking ability. Some parents will directly tell a child that it is stupid or a moron. A boy who is trying to repair his push bike may be simply pushed aside by father who indicates that he is obviously too stupid to be able to make such repairs and does it himself.

Another way the Adult ego state can underdeveloped is due to what has historically been called maternal over protection. In Transactional Analysis terms the mother (or father) does not allow the child develop out of the symbiosis it formed at a very young age with mother. A new born has no Parent or Adult ego states and thus it has to form a symbiosis with mother and ‘use’ hers until it develops its own.

In some cases the mother or father will not permit the youngster to develop their own Parent and Adult ego states. They can do this in a variety of ways.

1. Restriction of the child’s social world. The child is encouraged not to develop friends and out of family contacts. The child may be kept from going to school because he often gets ‘sick’. Indeed when a child develops a school phobia (and refuses to go to school) often that is due to emotional manoeuvring by the mother in the back ground who does not want the child to go.

2. Excessive contact. This can be continuous companionship of mother and child, prolonged nursing care, excessive fondling, prolonged breast feeding, sleeping with mother long past infancy. Highlighting of a special connection or relationship between child and parent. This can even be mildly romanticised and thus one has the development of the oedipus complex and the electra complex.

3. Infantilization. The parent treats the child in the same manner it would a much younger child. This can be in feeding, dressing, bathing, washing, punishing. The mother may dress a 13 year old son or punish him by putting him to bed in the afternoon.

4. Maternal control. This can manifest as either overdomination or overindulgence of the child by mother. In later life parents can use money to exert maternal control over a teenager or young adult.

All of these pressure the child to stay childlike and not develop a competent Adult ego state. If a child cannot think for itself then it has to continue to rely on mother to think for it. Thus we have another reason why as an adult a person may find it difficult to stay in their Adult ego state and require Adult ego state strengthening exercises.