Examination of the demon personality

Instead you acknowledge its power in the therapy process and begin talking to it and forming relational contact when and how it wants. You don’t have a choice to do it any other way. As Berne says, it holds all the cards to play at any time it wants.

Elaine Childs-Gowell wrote a chapter in a book called – Make love to the demon. (Horizons in bioenergetics (1980) ed. Joseph Cassius)

As we know in his book – What do you say after you say hello – Berne also writes about a concept called the demon. Unfortunately Childs-Gowell does not appear to state anywhere in her chapter that what she is calling the demon is meant to be equivalent to what Berne called the demon.  However what she writes about the demon includes many similar characteristics of the demon as described by Berne and myself and I will include some of these here.

Berne makes number of comments about the demon in his book and I have included one of them here in the first picture. 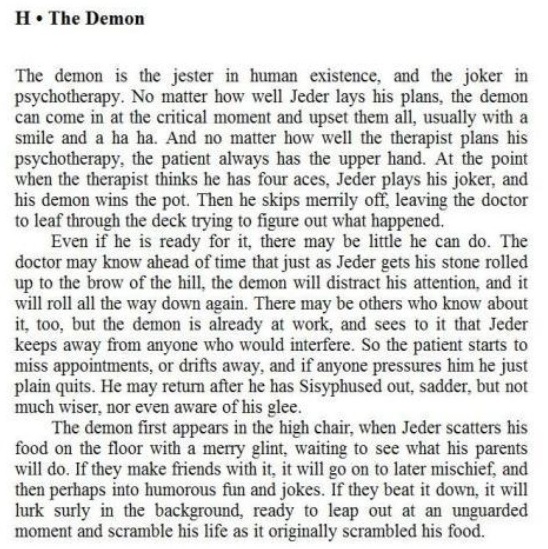 First she talks about the resistant nature of some sub personalities.

“Most psychotherapy involves the participants and the therapist in dealing with their personality’s sub personalities, which are resistant to change. These parts of the personality are often incongruent with those other parts which desire change. In fact, they are often antagonistic to the parts which recognise that the client is stuck in an unwanted pattern.

The process of intrapsychic healing engages the client-therapist pair in devising rituals for creating awareness of these various sub personalities. The sub personalities become involved with rituals which will reconcile the various parts of the personality that are keeping the client “stuck”. This static position (Bateson) is often viewed as a “bad” part of the personality and is frequently denied, rejected,  or repressed by the individual to whom it belongs. Often these parts of the personality are the source of projection of dislike upon other persons close to its owner. Possessing, acknowledging, and appreciating the stuck part is a major goal of psychotherapy.”…..

“In this sense, the client indeeds confronts the demon, that portion of the personality which resists change, and which often proves rigid and unmanageable.  This, the very state of recognition, or access to the demon, is intrinsically the conquest of a barrier to change, and consequently may be viewed as evidence of possible acceptance of the new paradigm.”

My observations and understanding of the demon sub personality is that it can indeed cause major disruption to the therapy of the client. Whilst I understand why people would see this as a resistance to change I think that is an error. The basic principle of the demon is: “I will help you to survive even if it kills you”. Obviously a bizarre outlook but the outlook of the demon none the less. So it is not a resistance to the therapy goals, it is a survival strategy.

The demon can sit quietly on the sidelines and do nothing to disrupt the therapy for some time however it will speak up loudly when it perceives the therapist and therapy entering an area which it sees as important to the persons survival. For example a self harmer who eventually directly addresses their self harming behaviour and talks about stopping or reducing it. If this person has a demon sub personality then the demon can wreak havoc on the therapy at that point. The therapy has no chance of success when this happens.

“rigid and unmanageable”, yes the demon is often like this

“Some people have parts or a part of the personality which torments them. This is the portion responsible for auditory hallucinations commanding them to action or stillness, even in circumstances antithetical to rational wishes”.

I wouldn’t call them auditory hallucinations instead they can be quite vocal internal transactions between the demon and other ego states in the person. And those can have a quality of torment, commanding action of some kind and it can be completely antithetical to rationality.

I very often will ask the client to draw the demon and give it a word bubble. The client usually knows the words clearly and loudly.

“Through psychotherapeutic rituals, demons or “bad me” parts of the person or community can be recognised, appeased, exorcised, or otherwise transformed and re-integrated into the personality or community where they cease to cause trouble or to torment the individual or community”.

The demon is often seen in a negative light by the rest of the personality, the “bad me”. And the demon may even revel in being the “bad” part. My view is you (the therapist) never attempt to do therapy on the demon, the therapist will be left confused and in no mans land. You never try to integrate it, or exorcise it, or appease it, or transform it. Instead you acknowledge its power in the therapy process and begin talking to it and forming relational contact when and how it wants. You don’t have a choice to do it any other way. As Berne says, it holds all the cards to play at any time it wants.

Here are some pictures people have drawn